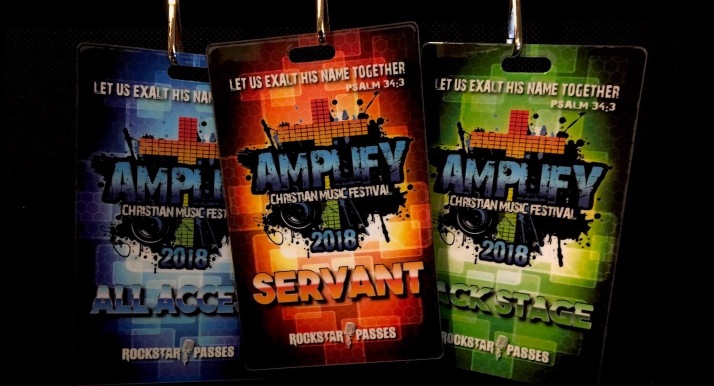 For as long as I’ve attended concerts, those passes hanging around the necks of stage crews, production techs, security and other concert officials have always intrigued and beckoned me: Getting to go “behind the scenes” where so few are allowed, flashing your badge like it’s on loan from the FBI to allow you access to coveted information, famous artists, and the “inside” scoop.

Pictured above are the passes available at the 2018 Amplify Festival. The beautiful blue ALL ACCESS allowed you, well, it allowed you all access. You could go anywhere, talk to anyone, and you weren’t going to be questioned or tackled by security. It was, obviously, the least available, but perhaps the most sought-after.

Then the emerald green BACKSTAGE pass. It allowed access to the area just behind the stage, and into a few areas without raising too much attention. Artist areas, many production areas, hospitality, and the like were still out of reach. There were quite a few of these handed out. You still had to be connected to the event somehow, but the amount of scrutiny definitely was not to the level of the shiny blue passes.

And finally, the SERVANT passes. These went to anyone who volunteered in any area of Amplify. If you were taking the trash out, driving shuttles, parking attendees, praying for folks, or any number of other tasks, you were handed one of these orange “about everybody’s got one” passes. But let’s be real – next to the other less-available passes, these were like consolation prizes, right? I mean, they say, “SERVANT” right there on the front! They might as well say “errand boy”, “slave”, “nobody”, or “bottom of the totem pole!”

You would be right to think that, if it weren’t for one inconvenient fact: According to GOD’s perspective, “servant” is synonymous with “greatness.”

There’s a fun word I learned long ago:

Paradox. A statement or proposition that, despite sound reasoning from acceptable premises, leads to a conclusion that seems senseless, logically unacceptable, or self-contradictory.

(In “Arkansas lingo” it means, “you’ve got that flipped around backwards.”)

As usual, GOD is much more concerned with the state of the heart than the color of the badge around the neck. If He kept a scorecard, it would be filled with things such as humility, sacrifice, temperance, self-control, honoring others, and the like. In Mark chapter 9, we see JESUS tell his followers, “If anyone wants to be first, he must be last of all and servant of all.” That, ladies and gentlemen, is a paradox of epic proportions! What event warranted such a statement? The disciples had been arguing about who was the greatest among them.

In fact, as the ultimate irony, JESUS had just been telling them “The Son of Man is being betrayed into the hands of men. They will kill Him, and after He is killed, He will rise three days later.” It’s like He was saying, “Hey fellas, I’m about to pay the ultimate sacrifice, the ultimate act of humility, the most selfless, servant-like act possible: I’m going to DIE for you.” But their pride wouldn’t let them hear Him. They were so busy  thinking themselves as the greatest that they missed the point the GREATEST MAN EVER was making: It’s not about what you want FROM others (recognition, praise, honor, envy), it’s about what you are willing to do FOR others.

If you think about it, that’s the basic premise of following JESUS, isn’t it? Denying your own desires, your own ambitions, your own honor and turning everything over to Him? He said in Mark 8, “If anyone would come after me, let him deny himself and take up his cross and follow me.” Choose to die to yourself. Only then will you really live.

“The call to live and be great is a call to serve and even die.”
– Marshall Segal, Desiring God

In Landing this Plane, I’ll say that I know many of the men and women who donned the blue all access passes at Amplify. They are some of the most godly men and women you’ll ever meet. They work tirelessly for months and months and months to make Amplify a reality (check out this interview with the founders of Amplify). In no way am I taking anything away from them. However, I am challenging us all to use a different perspective when it comes to those blue, green and orange passes. Perhaps then we will see them as GOD does – a perspective where the greatest, and the one with the most access to the heart of GOD, is the SERVANT.

So to everyone who wore the pass with the greatest access at Amplify – that orange badge that meant you were there to serve others, you were there to show the love of JESUS, you were there to show humility instead of pride: I honor and exalt you. And not only me, but GOD does as well. 1 Peter 5:5-6 states, “God resists the proud but gives grace to the humble. Humble yourselves, therefore, under the mighty hand of God, so that He may exalt you at the proper time.”

I generally receive a backstage or all access pass during Amplify. But from now on, it’s going in the back pocket for when I need it. The SERVANT pass will be the one around my neck. I hope to see all of you great servants again next year!

If you’ve not listened, check out our podcast recapping Amplify and discussing being servants!

One thought on “The Pass with the Most Access”

Joseph’s story started with going out with his brothers and being left in a pit. Now, approximately 22 years later, Joseph and his family are reunited. Will Joseph use his position of power to punish his brothers or will he show them mercy, grace and love? The journey that GOD has taken Joseph on is nothing short of miraculous. But the question is, has Joseph really ever gotten out of that “pit” they left him in?
After interpreting the dreams of the baker and the cupbearer, Joseph was hopeful his freedom would soon follow. Well, it didn’t. After TWO MORE YEARS in prison, he is now called to interpret Pharoah’s dreams. What would GOD show Joseph through these dreams? And how would Pharoah respond to Joseph’s word from GOD?
Found faithful, but in prison again, dreams become part of Joseph’s reality. Except this time, it’s a butler and a baker that have dreams that will change everything. How in the world could dreams from two other prisoners possibly play a role in Joseph’s life? While you and I may not find ourselves in THAT situation, we do find ourselves in times that we may not understand. What should we do while waiting for the promises that God has for us?
Joseph had been sold by his brothers into slavery and taken to Egypt. GOD had placed him into the house of Potiphar, captain of the guard and an officer of Pharoah. Joseph had a decision to make, would he follow what GOD had planned and do what he was supposed to or would he fall into victimhood and fall away. If that wasn’t enough, then Potiphar’s wife made him quite the tempting offer. How did Joseph respond?
Loading Comments...
%d bloggers like this: